Owari no Seraph (Seraph of the End) 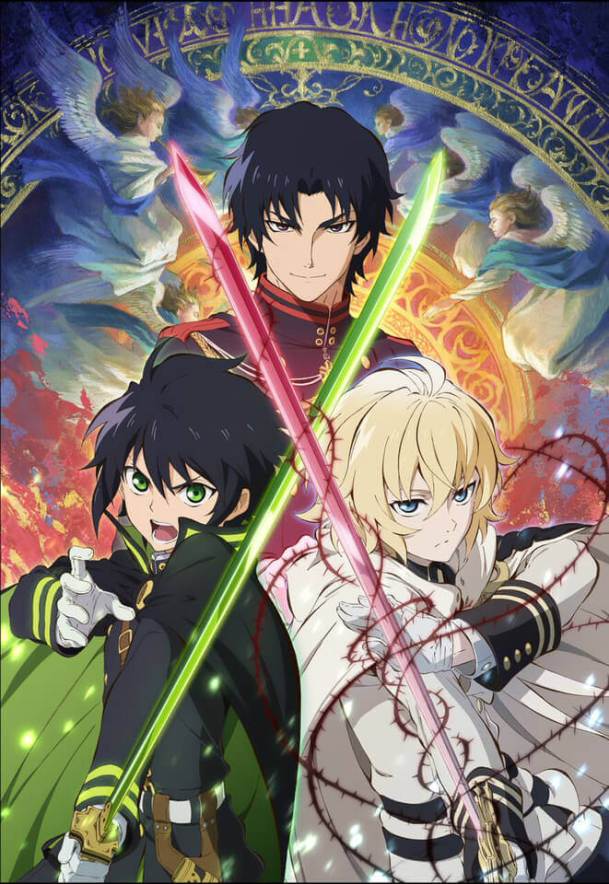 A mysterious virus kills everyone above the age of 13. The survivors are enslaved by vampires who now have taken control. Among these survivors are Yūichiro and Mikaela Hyakuya, two young boys kidnapped by the vampires from the ‘Hyakuya’ orphanage with other children they consider as their family. In fact, these children are hold and treated as livestocks for these “bloodsuckers”. Then Mika came up with an escape plan to save his family, however the plan failed and Mika sacrifices himself to save his best friend Yū. Yū seems to be the only survivor and is found by the Demon Army, a unit which kills vampires. The story goes on following Yū’s training in the Japanese Demon Army to defeat and take revenge on vampires. On the other side, Mika is still alive as a vampire and wants to find and protect his best friend.

The anime series has a very good storyline and many emotional scenes such as grief and sorrow. Characters who mainly go through emotional burden are Mika and Yū. Especially the flashback scenes of both’s past make you feel sympathy. The contrasting scenes of their past and present lives are well depicted. Both were happy kids in the orphanage whereas they are now filled with so much hate and anger. For example, Yū has never really dealt with the death of his family, especially the death of his best friend Mika (Yū is unaware of Mika’s survival as a vampire). The scenes of Mika’s murder repeats daily in Yū’s mind which causes him to suffer. Therefore, the audience gains much sympathy for Yū but also for Mika who has lost his humanity against his will. 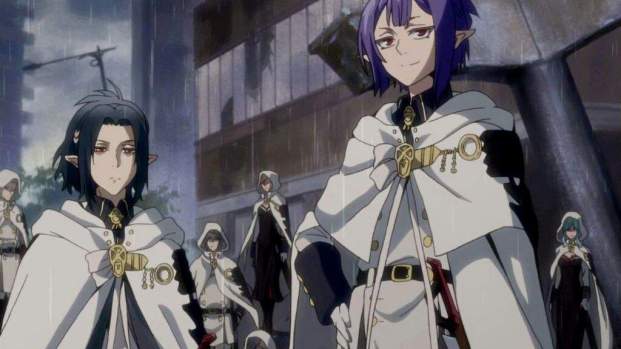 ‘Owari no Seraph’ portrays many good supernatural elements such as the apocalypse, the destroyed cities and the so-called apocalypse creatures. The illustration and existence of a vampire city makes the anime story authentic. The process of making a contract with a demon is well shown. Indeed, this is the path which the Demon Army, also Yū, has to go to gain more strength. This contract is done in the subconscious. The presentation of the different kind of demons and their powers are very well done. The depiction of a demon is rather beautiful than scary (e.g. Asuramaru). Clearly, demons use the weakest point of a human to manipulate them and therefore it is a very dangerous path they have to go. In fact, after having made a contract, the demons are kept into weapons such as swords, arches and guns. Another main supernatural element are the vampires. They are depicted as emotionless and very cold creatures. This cruelty can be seen in the scene of the vampire Ferid Bathory and the Hyakuya orphans. This sad and devastating scene takes place in the first episode: Ferid murders with pleasure Yū and Mika’s family in front of their eyes just to see their despair. Furthermore, the vampires are also shown to be much stronger than mankind. The scene with the vampire Crowley Eusford and the Shinoa Squad (a squad of the Demon Army, where Yū is also part of) is a perfect example for their enormous strengths. Here Crowley lifts the car of the Shinoa Squad with one hand, even the Squad is surprised by his power. Moreover, in ‘Seraph of the End’ vampires are attractively beautiful creatures in comparison to the ugly and scary depiction in myths. Indeed, most of them have more feminine looks such as Ferid Bathory and Lacus Welt (a vampire who often works with Mika). The most masculine vampire in the anime series is Crowley Eusford.

One of the main and most important topic is family. The meaning of this word is differently depicted: Family does not end with blood. The past scenes of Mika and Yū are a perfect example. Mika provided for his ‘family’ and made everything to help and protect them such as hatching an escape plan by himself. A strong family bond developed between Mika, Yū and the orphanage children. Even though they are not blood related, they act like a real family. The family feeling comes up at another time: Shinoa Squad. This is the second time where Yū belongs to a family which is not blood related.

A further marked aspect are the funny interactions between the characters. For instance, the conversations within the Shinoa Squad is a comic relief. Shinoa (leader of the squad) likes teasing others with her sarcastic attitude, especially towards Yū. A further character who likes teasing Yū is Guren (Lieutenant and rescuer of Yū). The relation between both is very funny: Guren likes to swear at him and punches him because Yū always ignores his orders. The funny interactions are also presented in the Vampire Army. Ferid enjoys teasing others especially Mika who mostly responses violently.

The anime also shows more or less implicit character developments. The deuteragonist Mika used to be a happy and always smiling young boy who turns into a moody and self-hatred vampire. He never smiles and barely speaks. Indeed, he also does not show any emotions and seems to be disinterested in everything. (SPOILER ALERT: Mika’s drastic personality change even shocks his best friend Yū after they have seen each other again.) The other character who has undergone a vast character development is the protagonist Yū. Due to an awful family tragedy, he used to have a very antisocial attitude, however after meeting Mika in the orphanage, a more kind side of his personality has been revealed. Unfortunately, after having witnessed the death of his new family (the orphanage children especially Mika) he is filled with anger. This results that he firstly rejects making any new friends, but after joining the Shinoa Squad, he remembers how important family is. Another character where a development can be seen is Yoichi Saotome, a member of the Shinoa Squad. Yoichi used to be a very shy and fearful boy who gets stronger and stronger. This can especially be seen after he has made the contract with a demon.

Yū is very light headed and is mostly called ‘idiot’ by his camarades. He is bad at making friends and do not like to work in teamwork. The fact that he is obsessed with the idea of killing every vampire, he seems to ignore orders on the battlefield. He also has a strong sense of protection for his family. The meaning of family becomes more important to him because the guilt of having abandoned Mika never vanishes. 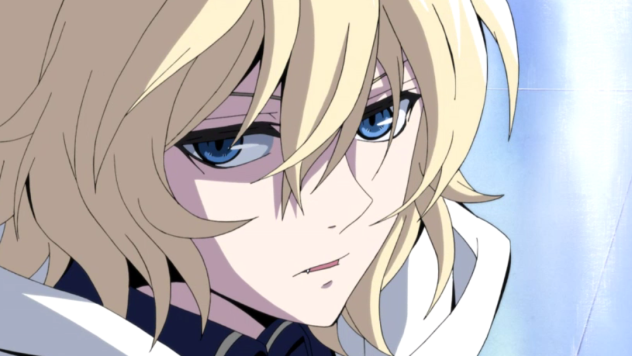 Mika is Yū’s best friend in the Hyakuya orphanage. After being transformed into a vampire, Mika wants to find Yū and protect him from both, humans and vampires. He is filled with hatred and self loathing and so he does not smile anymore as he used to as a kid. This horrible transformation changes his personality and so it is almost impossible to not feel empathy with him.

Ferid is the 7th Progenitor which means he belongs to the royalty class of the vampires. He has a very chatty, playful but also sneaky attitude and loves to tease others. Indeed, he is known for his cruel and sadistic art of entertaining himself. For instance, he enjoys to crush children’s hopes to see their expression of despair in their eyes. Ferid is also very unpredictable and so you never know what his next moves are. 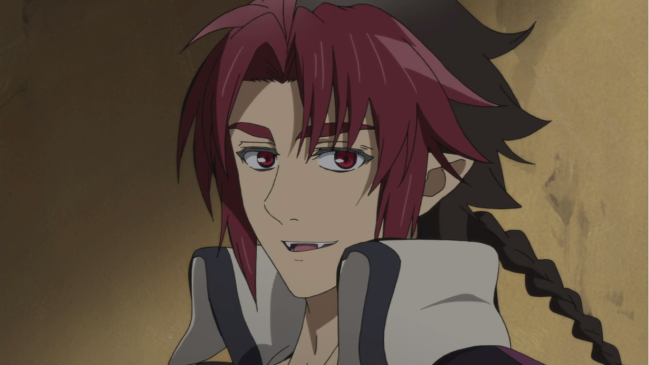 Crowley belongs to Ferid Bathory’s faction and is the 13th Progenitor. He has a very patient and calm personality. He is very fond of following Ferid’s orders because they seem to be extremely interesting for him. In other words, interesting things are an important motive for his actions. The fact that Crowley is always accompanied by two female vampires (Chess and Horn), gives him the image of a womanizer.

The animation is very beautifully drawn. The uniforms of both armies (Vampire and Japanese Demon Army) are unique and remarkable.The art of the characters is lovely and marvelous. Almost every character is depicted as beautiful and effeminate. They have a cute appearance due to their big eyes. Even vampires look rather adorable than scary. Moreover, we really like the music choices for the opening and ending themes even though they also contain a few spoilers. X.U. from Sawano Hiroyuki is used for the intro and scaPEGoat from the same artist represents the end song. In fact, one can say that the lyrics of the song X.U. indicates the words of Yū talking to Mika whereas the text of scaPEGoat represents Mika’s answer to Yū’s words.

Unfortunately, the anime also has some negative aspects. They could have shown more of Mika’s development and transformation from a human into a vampire. As a deuteragonist, Mika should have given more focus in the anime series. Indeed, this is the only negative aspect we can think of. All in all, we were fascinated since the first episode. It is a very good beginning of a season showing the past and the first meeting of Mika and Yū as they have become a family. These scenes make you feel empathy with the characters and show how much they have to suffer after witnessing the death of their family. Even though ‘Owari no Seraph’ is a shōnen anime, one can say that it might attract more female audience because of the cute appearances of the characters and the relationship between Mika and Yū.