Many centuries ago, the young princess Kanna is captured in a castle because she is feared by the society due being the last descendant of the winged race. One day, she met a soldier  Ryūya and both fell in love. Ryūya attempted to fulfill her wish to see the world outside of the castle and to find her mother. However, he must overcome many obstacles which complicated his attempt. Centuries later, a boy named Yukito comes to a town to make money at a festival and there he meets Misuzu. She reminds him of his mother’s words: “If you find the reincarnation of the winged girl, you have to set her free!”. Both are getting closer and closer and develop feelings. However, Yukito has to decide whether to leave or to break the curse. 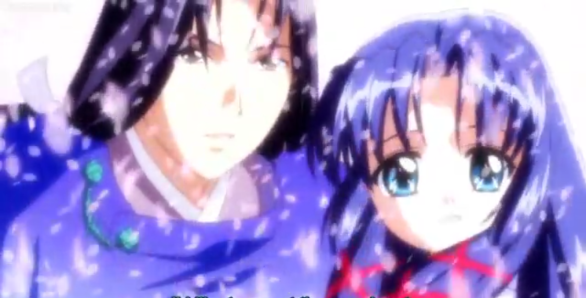 Many emotional aspects are included especially the tragical state of Misuzu. SPOILER ALERT: She has a strange illness which can not even be diagnosed by doctors. Her health gets worse from day to day. In addition, she has no friends and most of the time she is alone. Her ‘mother’ is too busy with work, so that she does not have a lot of time to take care of Misuzu. Therefore, Misuzu has to provide for herself and tries to be happy all the time. Her health gets worse after having met Yukito. Not only Misuzu has to suffer, but also Kanna from the past story had undergone a painful experience. She is separated from her mother and is not allowed to see her. Both, mother and daughter, are treated like a danger and inhumans because of their wings. The movie does also have a sad ending.

In fact, one can say that ‘Air Movie’ mostly attracts female audience because of the dominance of romance aspects. The development of a love relationship between Misuzu and Yukito is very clear and obvious. The same can be considered for Kanna and Ryūya; both relationships start with becoming friends and then it develops into a girlfriend and boyfriend story. In fact, this is especially the case for Misuzu and Yukito, whereas Kanna and Ryūya become lovers.

The anime does not only contains romantic elements but also fantasy aspects. Indeed, those are more or less kept to the minimum. The myth about a girl (Kanna) with wings and her curse is the main fantasy aspect. The others are more related to the young boy Yukito such as the moving doll and his goal to find and free the ‘girl in the sky’.

The movie also shows a small character development. Misuzu’s development from the beginning to the end is good depicted. She was alone all the time and now she has found a friend in whom she has fallen in love with. Besides Misuzu, her ‘lover’ Yukito has also undergone a tiny development. He had a stubborn and rough personality but he changes into an open hearted character especially towards Misuzu.

Last but not least, the visual elements are also worth to mention here. We think that the art is different than in other anime movies, because it contains many still frames which makes it a bit annoying even though you get used to it. Moreover, we do not like the art and animation style used in “Air Movie”, it could have been a bit more detailed.

All in all, the movie is nice to watch but it is a bit kitschy. If you are fond of that kind of movies, you might gonna like that one too.