Kiki is a 13 year old witch who is still in training to become a full ‘witch’. It is a tradition that young witches must spend one year far away from home and so Kiki decided to climb on her broomstick accompanied by her cat Jiji to find a nice town. She finally settled in Koriko, but she does not only have issues to adapt but also struggles to find a place to stay. Then she meets Osono who takes her in but only in exchange for help in her bakery. Kiki opens an own courier service and becomes independent. She starts to fit into the society, gains new experiences and understands what it means to take responsibility.

The storyline is well chosen: it shows the adventure of a young witch who has to learn being independent. It is a beautiful movie to watch even though it does not contain many suspenses. The movie is more like a family movie with a heartwarming story. The dominant aspects are the ups and downs of Kiki and how she learns to deal with them. She experiences being independent for the first time. The movie shows that this can be scary and terrifying especially at such a young age (13). Nonetheless, Kiki manages to deal with it. 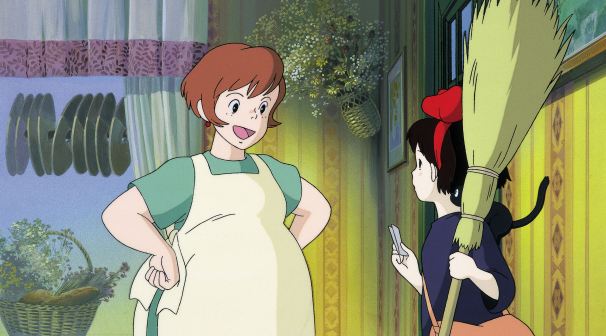 Being about a young witch, the anime movie contains a handful fantasy elements such as Jiji a talking cat. An interesting factor is that the presence of witches seems to be usual for the citizens where some are fond of them and some are not. We also like the inclusion of the traditional myth of a witch riding on a broom with a black cat.

An interesting aspect are the emotions shown in the movie. The most dominant emotions are love and friendship. A woman, who does not even know Kiki, decides taking care of her like giving her a place to live and sleep. Kiki also encounters joy in doing her delivery service. She is very fond of her work and she meets new friends. Nonetheless, the anime movie also shows that Kiki has to suffer. Her first appearance in the new city was catastrophic. In addition, she becomes depressed as she almost lost her ability to fly.

The characters in ‘Majo no Takkyūbin’ are very enjoyable. Kiki, the main protagonist is very ambiguous to work and to have finally found a room to sleep. She is satisfied with little meaning even a tiny room in an attic makes her very happy. Kiki is not only a determined young witch but also very self confident and brave. The highlight however is her cat Jiji. One can say that he is the main comic relief in the anime movie with all his side remarks. You will definitely fall in love with him because he is so lovely and adorable. Even the supporting characters are fascinating with their more or less realistic personalities.

Furthermore, the art of the anime is well done. It is detailed and simple at the same time. The nature scenery is very beautiful depicted, especially the ocean. Besides the background, the design of the characters also has a beautiful animation. Their emotions are well done and the depiction of the cat Niji is cute. We have to mention that the animation is mind blowing especially for an anime released in 1989. It is sometimes unimaginable that the movie is almost 30 years old. Next, the choice of the music and sounds are also well done. Not only the opening theme was a good choice but also the music included in the movie itself is very entertaining and perfectly matches.

All in all, ‘Kiki’s Delivery Service’ is an enjoyable and entertaining anime movie even though the ending is a bit kitschy and predictable. However, we would recommend it because it is a sweet and lovely story. The personality of Kiki makes you liking the movie even more.