(Side Note: Book of Circus is based on the manga story again, not as Season 2) (The series continues after Season 1 episode 14)

The 3rd season of Black Butler takes place at a circus. The Noah’s Ark Circus fascinates their audience every time with great performances. However, wherever the circus occurs children mysteriously disappear. So this is a perfect undercover job for the Earl Ciel Phantomhive and his demonic butler Sebastian Michaelis to find the missing girls and boys. In other words, Ciel and Sebastian participate with a covert investigation which turns out to be a bigger challenge as they thought. The circus performers start to get more and more suspicious. In the end, the discovery of the secret behind the missing children and the circus pushes Ciel to his limits. 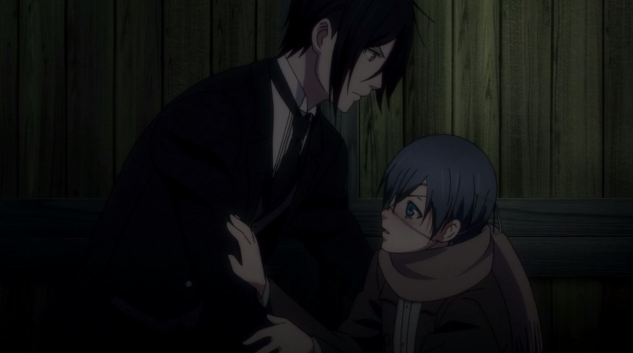 The anime series has a quite amusing and thrilling concept: in every city the Noah’s Ark Circus appears, more and more kids disappear. Ciel and Sebastian have to investigate this case while participating as circus athletes which makes the series even more amusing. Many suspenes are included as they are getting closer to the culprit and the reason of the abduction of the children. It is really thrilling and exciting to find out the ‘dark’ secret of this beloved circus.

‘The Book of Circus’ contains many funny elements. For example, William T. Spears who is a further shinigami also works undercover at the circus. Indeed, he does not come along with Sebastian because both demons hate shinigamis and the same vise versa. Spears’ reason hating demons is because they steal souls. The constant competitions between both are hilarious, they also try to be better than the other one because neither of them want to lose. Moreover, we also like the entry test Sebastian and Ciel have to do. Especially Ciel’s cheating way to pass the test because later on the other performers somehow start to get suspicious how Ciel had passed the test. And of course, Sebastian and his love for cats is really funny as he gets on stage just to pet the tiger during the performance. The nicknames they were given by the circus members are also interesting such as Black for Sebastian, Smile for Ciel (indeed he does never smile or doesn’t like to smile at all) and Suit for Spears.

Besides funny elements, the series is also filled with many emotional or rather dramatical scenes. For instance, the flashbacks of Ciel’s past are always very heart-breaking as you can see that such a young boy has already experienced so much pain. However, also the past lives of the circus members are kinda sorrowful. According to the leader of the group Joker, all members are defective in some way: Doll has a face burnt, Joker is born with only one arm whereas it is replaced by a skeleton arm prosthetic and Snake was kept on display because of his scales. Nonetheless, a heartwarming element is that the whole circus works like a family where everybody is treated like a family member. They also try to help each other out in many ways.

Many new characters appear in the anime series. As already aforementioned Joker as being the ringleader and Snake as the snake charmer who talks through his snakes which is very amusing are only a few to mention. An interesting fact is that his snakes have famous names (mostly from authors) such as Wordsworth, Keats, Donne, Oscar, Wilde etc. Further amusing characters are Beast being an animal tamer, Doll being a tightrope walker and many more. We are really fascinated by the new characters because of their different and more or less unique personalities. Nonetheless, also familiar faces such as Grell and the servants also show up but having only more minor roles. 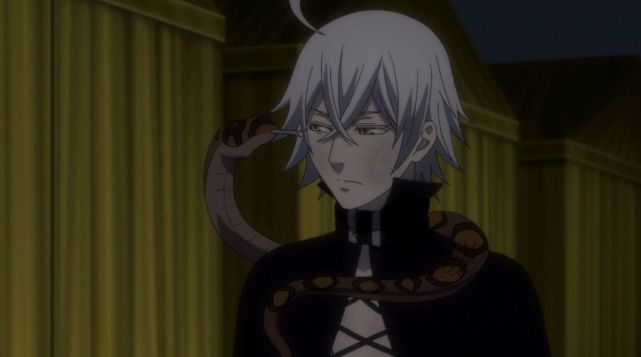 Snake is a snake human hybrid who communicates only through his snakes which means he reports what his snakes wanna say. He is very shy and embarrassed because of his scales on the skin. Snake cares for the other circus members and sees them as his family.

Joker is the ringleader of the Noah’s Ark Circus. He has a very cheerful personality who loves entertaining people and making them laugh. He takes care of the other circus members. Nonetheless, he can also be serious when his duties are involved.

The art of animation is brilliant as always with Black Butler anime series. We love the multi color of the circus and also the mixture with darker colors makes the anime even more enjoyable to watch. We are big fans of the character design here as their circus outfits are really fascinating. Not only those of the Noah’s Ark Circus but also Ciel’s and Sebastian’s outfits are amazing. Even though the anime takes place at a circus, it also contains many fight scenes which are quite easy to follow. Moreover, the circus shows and the various performances are very well drawn and contain many details.

Next, the opening theme is one of the best we have ever seen so far. The song ‘ENAMEL’ by Sid is really amazing, we love that song but also the intro itself is very well done and amusing. Also the ending song ‘Aoki Tsuki Michite’ by AKIRA is a great choice. We really love the ending theme as it can be interpreted in different ways.

All in all, the 3rd anime series of Kuroshitsuji is in our opinion much better than the second one. We really love the combination of crime solving and funny elements. It makes the watching even more entertaining and amusing. The highlights are definitely the circus athletes and the way of how Sebastian and Ciel manage to fit into their roles. The anime series is very thrilling until the end, it consists of many great new characters accompanied by fascinating music.