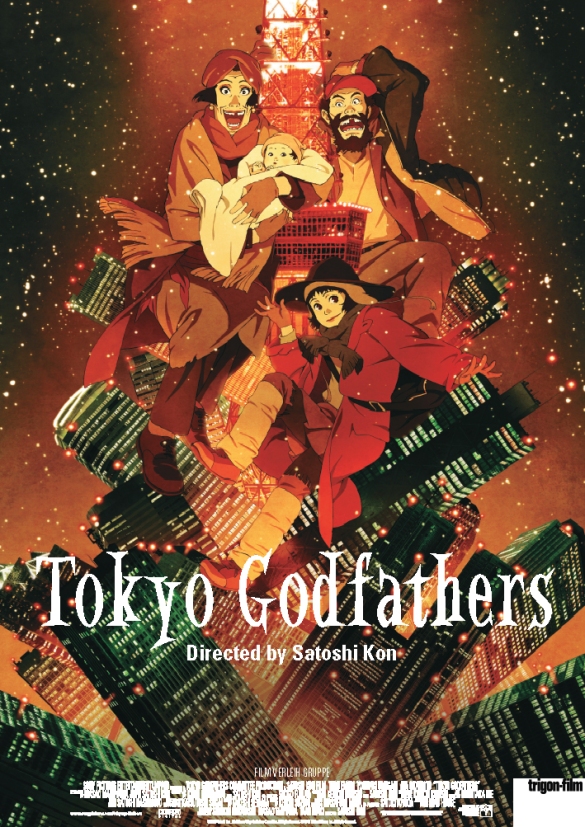 It is Christmas Eve and three homeless friends are trying to find christmas gifts as they discovered a newborn baby in the trash. They decided to take care of it and named it Kiyoko. The three homeless are a kind transwoman named Hana, a teenager who ran away named Miyuki and an aggressive man called Gin. Indeed the trio does everything for the baby. They search for its mother even though they only have a few information. On their adventure they do not only experience many serious events such as kidnapping and death but also confront their own pasts.

The plot is really interesting as it shows that three homeless friends take care of a baby even though they have barely anything to eat. They do everything to find its parents and protect it with their own life as if it is their own baby. The movie gives insights into the harsh life on the street especially during the cold winter time. Indeed, it is about a series of coincidences especially after those three people have found the baby: many miracles happen like one action leads to the other.

We think that ‘Tokyo Godfathers’ contains many emotional aspects. The revelation of why those people are living on the street and their background are quite heartbreaking. You automatically feel pity for them. The movie also shows other homeless people who have spent their whole life on the street. Even the background story of the baby and the ending are heart trending.

Besides emotional scenes, the anime movie contains many serious topics such as running away from home or drinking too much alcohol. Also other topics appear, for instance the gambling and the consequence of losing everything like your own home and family. At the end, you have to live on the street because you ended up having no money. The movie shows some dark sides of families and also the bad manners of teenagers who do cruel things probably because of boredom: they beat up homeless people even the dead ones. 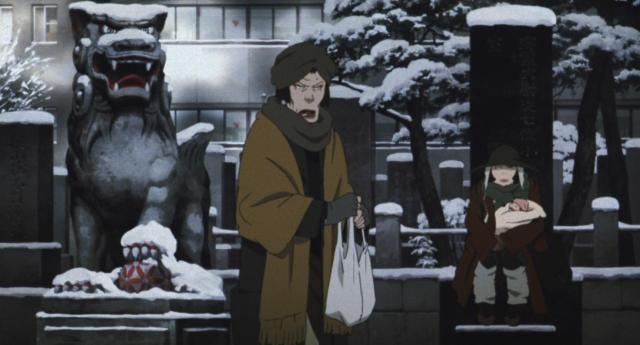 The funny elements included are the highlight. Especially the interactions between the protagonists are very funny and amusing. We like the arguments between Hana and Gin because they are very entertaining whereas Miyuki is the one who has to stop them. In fact, Hana is a drag queen but also seems to have feelings for Gin.

Many different characters with various personalities are shown. For example, the three homeless friends who consist of a transexuel, an old drunk guy and a grumpy teenager who ran away from home. Even though they differ a lot in their personalities, they seem to care and help each other. You can see a very strong bond between them like a family. 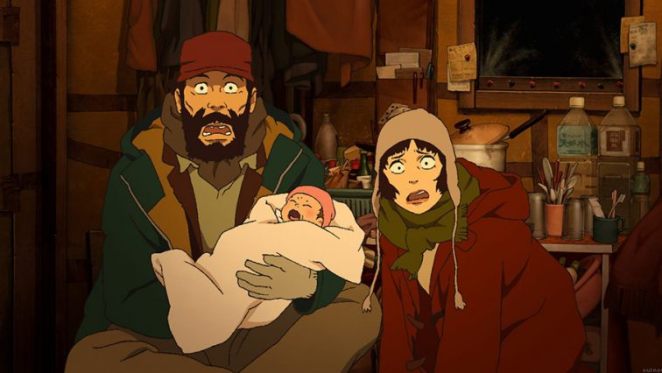 Moreover the art of animation is not bad but a bit eccentric. The emotions of the characters are very well depicted because they are detailed and quite extreme. The design of the characters is not bad at all; they differ in their appearance. The overall art in the movie is well done but we think that it could have been a bit more beautifully drawn especially the characters who are rather bad-looking and ugly or disfigured. However this design somehow perfectly fits into the story after all. In addition, the music at the end is okay which means nothing extraordinary or catching. We like the Japanese version of ‘Silent Night’ because it was quite amusing to hear how it sounds in Japanese.

All in all, ‘Tokyo Godfathers’ is a very entertaining movie which includes funny but also serious aspects. It is interesting to see people who don’t have much food or even money, take care of a baby and try to feed it. We definitely recommend this movie because it is worth to watch it.